Android X86, React Native and the Android SDK. The goal of this assignment is to load our code into a virtual phone running in VirtualBox.

Here are some videos related to this assignment.

Here is expo running in Android 7.1 hosted in VirtualBox: 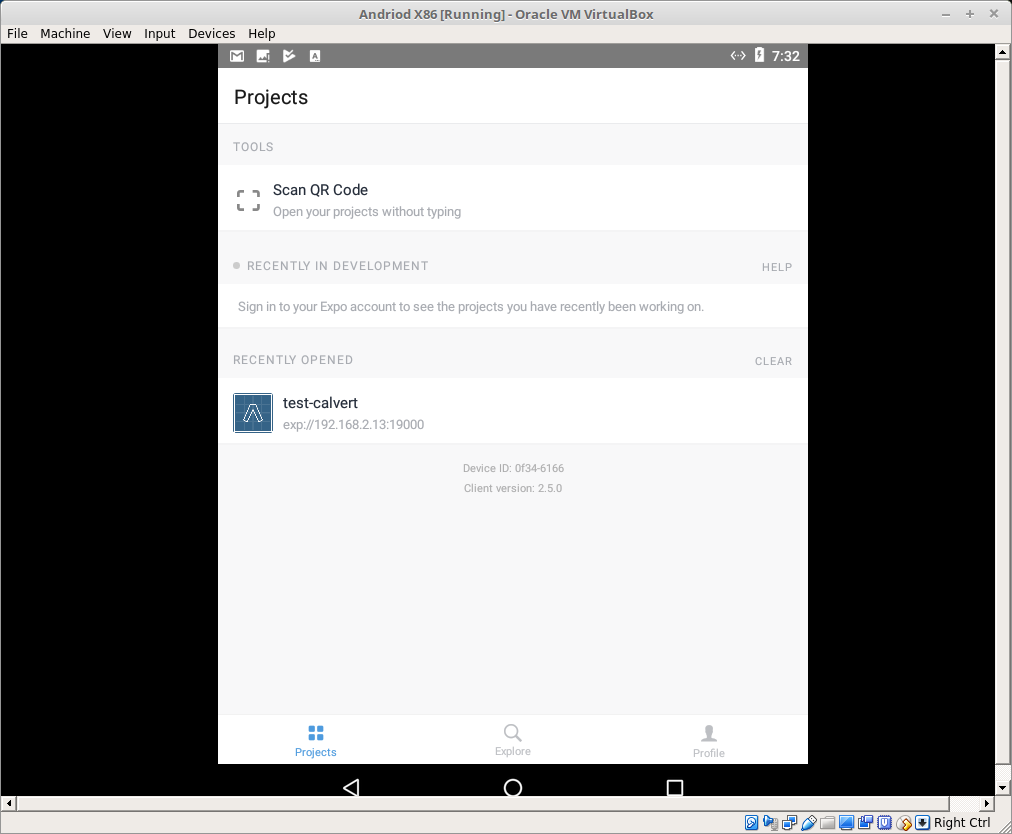 Here is our app running in Expo on Android 7.1 hosted on VirtualBox: 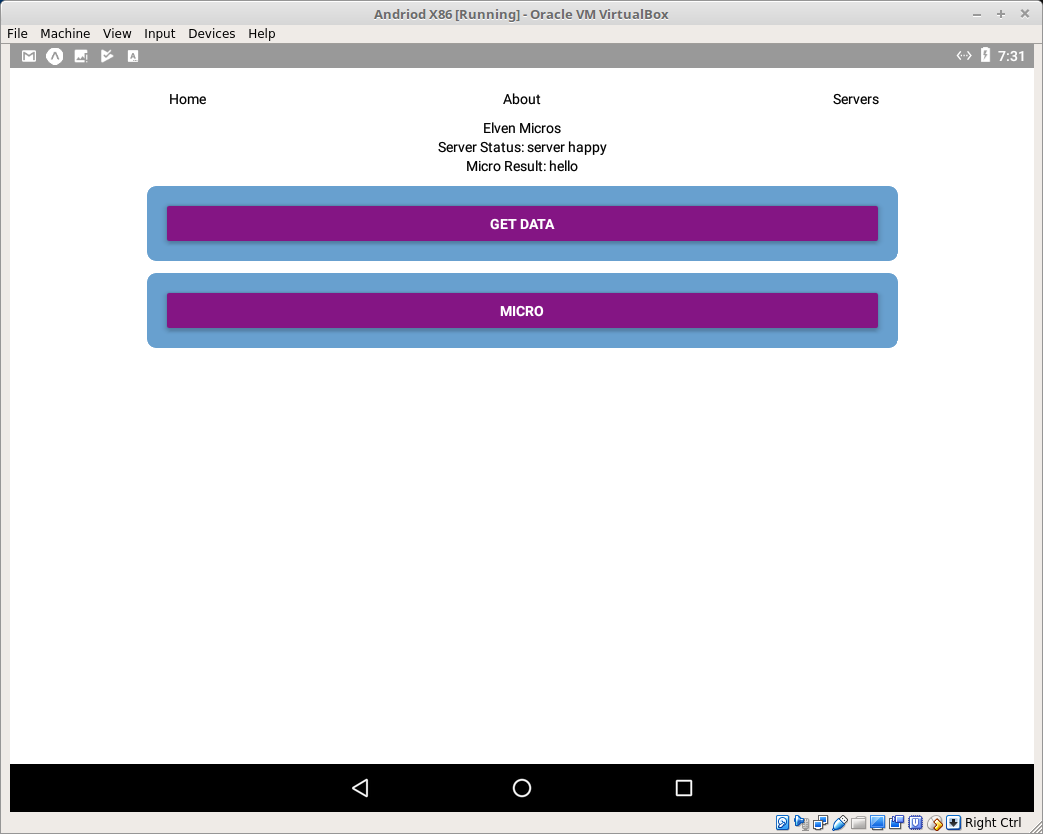 Download my version of the Android X86 Nougat (Android 7.1) build as an OVA file:

Double click on the downloaded file to load it into VirtualBox. Be sure to choose to Re-Initialize the MAC address. Run the Pristine Android. Once you reach the Welcome follow the steps in the wizard and log in.

Android studio comes as a zip file. Unzip it. This should create a folder called android_studio. Move it to your ~/bin directory for save keeping. Navigate to ~/bin/android-studio/bin and run studio.sh like this ./studio.sh. Create a new Android project. Choose the Android Stuff thing at the bottom. Oreo 8.1.

You probably don't need to do this:

Start the Android virtual machine. Get its IP address from the "About Tablet" section of the Settings app.

Connect to Android X86 from Pristine Lubuntu or where ever you are doing your development. You do this with adb connect and check your work with adb devices:

Here are the commands to connect to our instance of Android X86 once you have installed and configured with (Android Studio) the SDK.

Of coure, you have to use your Andriod X86 IP address. To confirm you are connected:

Of course, you should use Bridged Adapter for your version version of Android X86. To the get the IP, use the Phone's menu. Its something like About tablet and then Status . 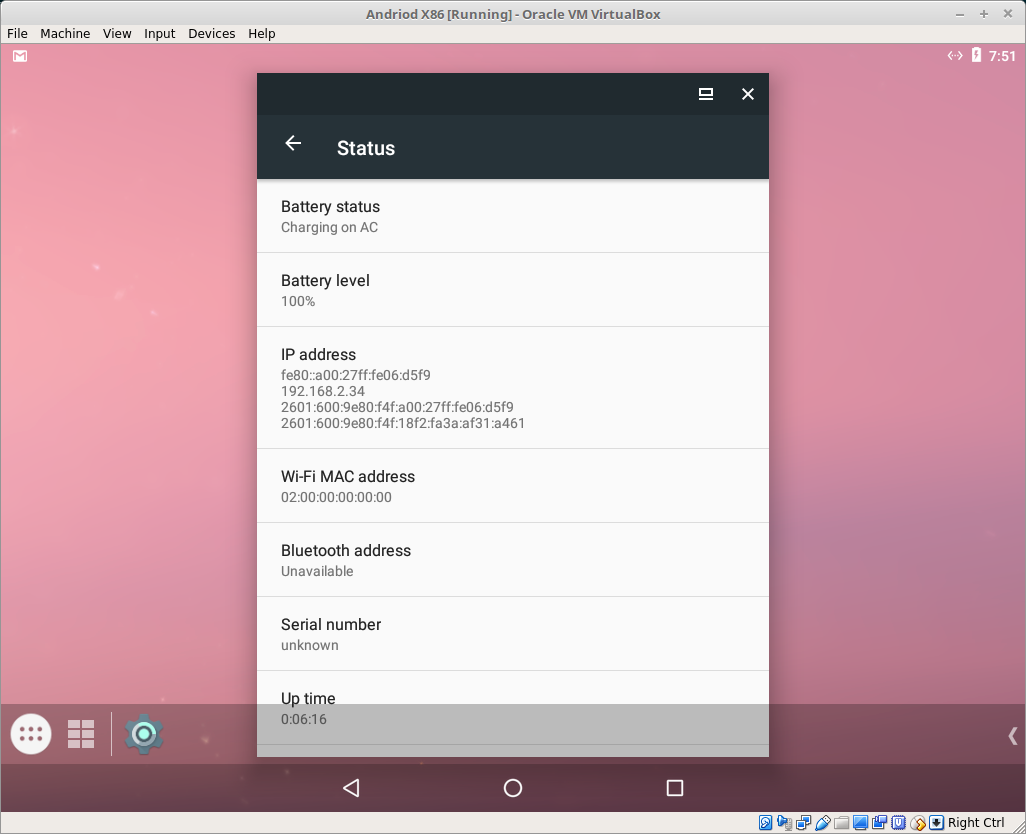 Android Studio runs fine in VirtualBox, it is the emulator it includes that will not, to my knowledge, work in VirtualBox.

In the File menu of VirtualBox, choose Close | Send the shutdown signal. A prompt will appear in the VM. Choose to shutdown the tablet.

If you need to connect to a Virtual Instance, get its IP and:

Take a screen shot of the Android Native application you built that you are most proud of running in the Android X86 VM.

There are many releases on the Android X86 site. I've picked out a version of Android Nougat (7.1).

You can grab either one one on that page, but perhaps this one is easiest to use:

Note the underscore, not hyphen, for the application name:

I thought I had this working, but...

On your phone, go to About Device. Find the build number. Tap it seven times.

Plug in your phone and lsusb: