The goal of this assignment is to help you organze, finalize and hone the projects you have been working on this quarter.

Showing Server Side Name and Author

Suppose we are running the server for SystemCheck on port 30034. If we go to http://localhost:30034, we should see the following information: 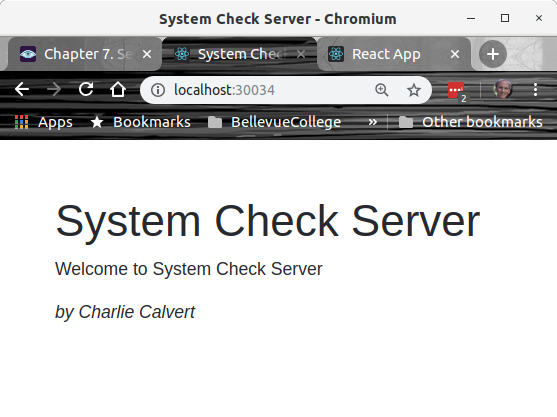 NOTE: This will only work if you have not used build-copy to build your client and copy it in the server's public directory. If you have done that, then you should see the client interface, not the server interface.

Start a project in the Background

You can use the Linux nohub command to start a program running in the background. The output from the program is saved in a file called nohup.out. Do not check nohub.out in to your repository. Probably the simplest solution is to add this to the .gitignore file in the root of your repository: nohup.out

Save this script as try-run-both in your scripts directory. Create a symbolic link to it from your ~/bin directory. It should start both the client and the server running in the background.

The point here is that running a build can take some time, as it runs npm install in three directories. The first time you run your app, you will need to pass in build as a parameter.

When you are done, commit any files you have modified, and run kcp from the root of your project. That alias should be built into JsObjects via ~/.bash_aliases. It looks like this:

NOTE: The above script runs a checkout on the client and server directories, so it will overwrite any changes to files in those directories unless you have committed them! Read that again!

Run any Project from Repo Root

I've saved the run-all script as a gist. Click the link and save the file as run-all in the root of your repository.

We want to have a script called run in the root of your projects. Don't forget to make it executable with chmod:

Each run file has specific port mentioned in it, so each one is unique. Be sure to the official list of ports.

Here is the script.

Notice that this script specifically spells out the environment variable that contains the port number for this app. This number and enviornment variable name changes for each project. The most official list of ports is maintained in the systemd Service Control assignment.

Run it like this from the root of your project:

NOTE: This would have been better as a script in the scripts directory which took a single parameter, the port on which the service runs. But it is too late to make that change now. Next time.

If you are on branch x, and want to see what is different between it and master:

The standard merge master into your current branch:

To copy one file from master into your current branch, go to your repo root and:

To copy one folder from master into your current branch:

When you are done, I should be able to start at least the following projects either from the project root, or from the repo root, with a single command:

Please let me know which programs you want me to check. I'm expecting a list like the one above. Be sure the root directory for each project has a run file in it.

All of these projects should just work when I start them as follows:

I also want both prettier and eslint . coming back clean in from the root of all the projects listed above.

Be sure to include your run-all and run scripts. They are the first things I'll check for.