This is assignment demonstrates key features of ThreeJs, a 3D library for JavaScript.

The repository is here: https://github.com/mrdoob/three.js.

The bower library is here: https://libraries.io/bower/threejs.

Begin by copying over the code from the ThreeJsBasics assignment:

The following module will add a floor to our scene in our ThreeJsBasics program. Note the call to the require method called define.

You should save the file into your public/javascripts directory as floor.js. Then add it to main.js in the config section. More specifically, you would add it near here:

You will need to modify the define call at the top of control.js:

The code passed to the define method will cause require to automatically load your floor.js file.

Below is the code to create and use the key method in the floor module:

It belongs in the constructor found in control.js. Insert it into your source just after you add the cube.

Create a bitmap called checkerboard.jpg that is 256 X 256 pixels in size or download the one found here. We don't have rights to use this publicly at this time, but we can use it in our assignments. Put it in an images directory in the public folder:

At this stage you should be able to run the program and see a floor. The cube from the basics program should be partially buried in the floor, but still visibly rotating. 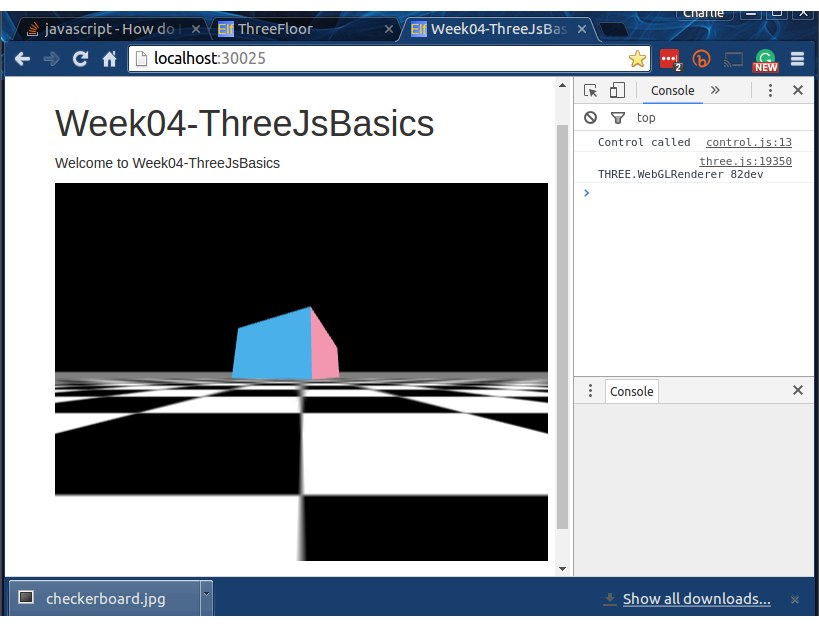 First let's declare some variables in control.js above the constructor for tracking movement and the camera position:

Now we want to capture mouse events in the constructor for control.js. The following code tells the browser to call certain methods when the user presses or releases a key:

You can place the above lines in a number of locations, but just below the calls to create the floor is a reasonable spot.

You also need to compose an onKeyUp method that looks the one shown above, but has the opposite effect. In other words, the boolean values are set to tell the app that movement to the right, left, back or forward has stopped. The method looks very, very much like the one above, with one important difference which I'm sure you can guess.

Finally we want to change the render method to animate the camera when the key presses are detected by the code above. At the top of the render method, add a four part if block that moves the cameraPosition. I give you the first of the four parts, and you can fill in the rest:

We will move in the x direction to mvoe left and right. Which direction, y or z, should we move to be able to move deeper into the scene? Just experiement a bit, and you will soon see which property to choose. Remember, we want to move left, right, forward and back. We don't move up and down. For now, try moving by plus or minus one unit.

Note: Recalled that we declared both keyMOve and cameraPosition, so you know what those objects look like.

Finally, just after our four part if statement, we move the camera to the new position:

When you are finished you should be able to "jump" right, left, forward and backward. You might experiment with moving smaller increments each time to make the jumps less jarring to the viewer.

NOTE: When the scene is first rendered, the camera may be right in the middle of a cube. This means you will have to "backup" (down arrow) to move away from the cube and see it. If you are standing in the middle of cube, it might be invisible. We will fix all this later, but for now, we have to live with the scene in its half-finished state.

Later you will see more complex code that allows us to move more smoothly through the screen, but this at least helps us get started moving around.

First, let's add a few more cubes to the scene. Our goal will be to create a scene that looks something like this:

When you first see the boxes in the scene, they will not have a brown wooden texture on them. Have patience, we will add them in this assignment, just not right away.

To get started, you could create a method called addCubes, based on the addCube method. It would begin something like this:

We would call this method from the constructor, rather than calling addCube. As you recall the invocation of addCube looks like this:

Now from inside addCubes, you want to call addCube, but you will need to do something with the last parameters in order to make the cubes appear in different locations. In fact, you might want to call addCube more than once in your for loop. Perhaps you could hard code one of the last two parameters, and do sometihng with the other one that involved the loop variable i.

After you "walk" down the aisle between the boxes for a bit, you might see something like this:

If you look carefully you can see that there is a small space betwen each box. I'm doing this mostly so that you can clearly see when one box ends and the next starts. In a final version of our game, we might not want to include that space. But for now, its useful. To create the space, just add a small value to the z location of each box. You'll probably want to pick a value well under 1.0.

The scene in your program right now probably looks a bit like the one in the screen shots, but the boxes have bright colors on them rather than a nice wooden texture. To add the texture, swap out this call to MeshNormalMaterial:

Put this call to MeshLabertMaterial in its place:

Here is a create texture which we can use in class, but not in our final games. Or at least not until we get permission to use it. Just right click and download to your images folder.

The results in your program are probably less than satisfying, as the boxes are hard to see. To fix that, we need to add lights to the scene.

Call it from your constructor:

Call the addSphere method just after your for loop in the addCubes method. Be sure to pass in the correct x and y parameters so the sphere appears at the end of our aisle, as shown in the screen shots above. (Hint, start with something like 2 and -7.)

One event handler that I should mention is window resize. This event is triggered when the window is resized and it causes the scene to be recalculated so that it fits properly inside the window.

Here is how we hook the event:

And here is how we handle the event:

On the same general subject, you might find it useful to just remove all the HTML (for now) from you index.jade. My code, at any rate, now looks like this:

As you can see, there is essentially nothing at all happening in index.jade. Our HTML body is occupied entirely by Three.Js. Later on we will see how to use CSS to lay HTML over the 3D scene.

To get rid of the borders around the scene:

We should ignore certain files in .jscsrc: