Because you save files to your DropBox folder, you can access them from multiple machines. In other words, you can create a file in N252, then have the latest version automatically saved to DropBox. When you get home, you can load it off DropBox back into StackEdit. Once you have things set up on both ends, you can simply open DropBox in either location and the latest version of your file will be loaded and saved automatically without even the need to press Ctrl-S to save.

In your Dropbox folder on Linux, create a sub-folder called StackEdit. This is where you will place documents that you create in StackEdit.

In StackEdit, choose the pound sign icon on the far left. In the Synchronize section, choose Synchronize | Save on Dropbox. A dialog like the one shown below appears. I want you to include a screenshot of this dialog when you turn in this assignment: 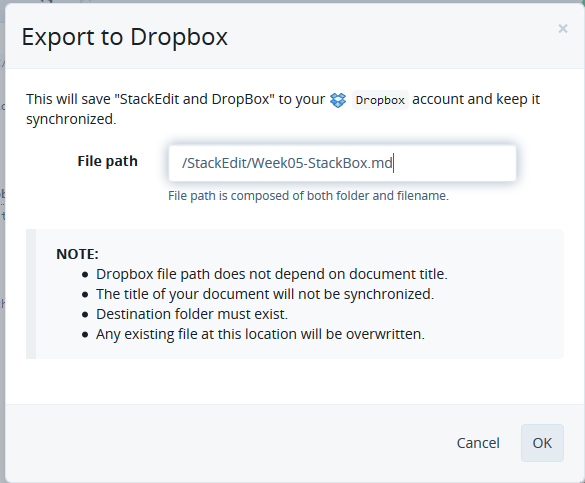 Choose to save you file in your StackEdit folder as Week08-StackBox-LastName.md, where LastName is your last name.

Take one or more screen shots of your work in DropBox. Remember to show the file you have created being edited in StackEdit with the "Export to DropBox" dialog open above it. Use screen shots to document your work so you can show me that you understand how to save files that you edit in StackEdit to Dropbox.

Take a screenshot of a listing from your DropBox folder on Ec2. The listing might be obtained with a command similar to this:

The contents of the file you save to DropBox is not important. Just put a few line of text in there, whatever seems interesting or important to you at the time. It can be anything, a song, a poem, an essay: anything.

Put the screen shots in a folder of your Git repository called Week08_StackDropBoxEc2. Also save the the Week08-StackBox-LastName.md markdown file to that folder. Put all the files in folder of the same name in the OneDrive folder that you have shared me with during the Online Presence assignment.