The Markdown Basics document will help you get up to speed with a simple markup language called Markdown. You can easily convert markdown files to other formats such as HTML and PDF. Since markdown is much easier to write than HTML, it is a great way to create HTML documents.

Summary of what we are going to do:

An old, funky, out of date, silent video that might still be helpful when you are learning markdown:

The video does not use the Atom editor that I now prefer.

The Atom editor should already be installed on your Virtual Machine. If it is not, you can get it here:

Once the install is complete, Atom should appear as an item in your Lubuntu Development menu. Open it and use it to work through the exercises in this assignment.

Enter the markdown code on the left, see the rendered result on the right when you choose Ctrl-Alt-M

To install the markdown-writer package:

Now it is time to setup the key bindings.

Markdown is a mark up language for creating documents. It is a tool for creating richly formatted documents with a simple easy to use syntax. For instance, if you underline some text, or place hash marks in front of it, then that marks it as an H1 header:

There are many other ways to mark up a document with markdown. You can also translate markdown to HTML.

When shown in the right renderer, the text shown above would appear in large bold font:

One of the most commonly used forms of markdown is the list:

When rendered as HTML, this markdown looks like this:

In other words, it produces this HTML:

Here is how to create a hyperlink:

Start with an exclamation point, a bang, and then put a few words in square brackets, then put the URL of the image in parenthesis.

Here is a longer example:

Here is part of the output created by this markdown code:

This is a markdown document with a list in it.

It can also be useful to tell markdown to leave the formatting for a text alone. For those of you who know HTML, this is similar to using the PRE tag. It can be helpful when you are trying to render code that has complex formatting, or when you are displaying poetry, that again has its own special formatting.

We can render such text in several ways, but one of the simplest is by starting with a row of three back ticks with no spaces between them. You can usually also use four tildas, or simply indent the text you want to format. To mark the end of the formatted text, add another three backticks: 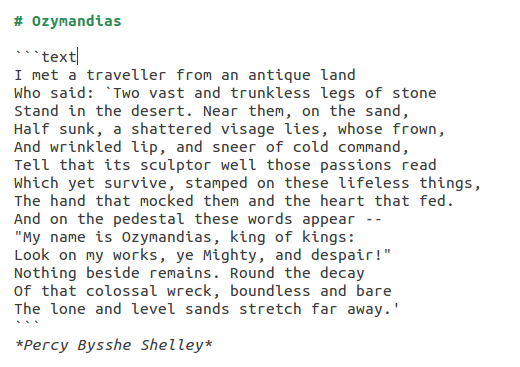 NOTE: The exact way to turn off syntaix highlighting with a particular renderer is not clearly defined. Here I have used the class text. You might als try nohighlighting.

Notice that putting asterisks around the author's name caused it to be rendered in italics. Putting two asterisks would make the text appear in bold print.

If we are having trouble with backticks, we can also just use a standard HTML PRE tag. We can always fall back on HTML if our other choices don't work for us. 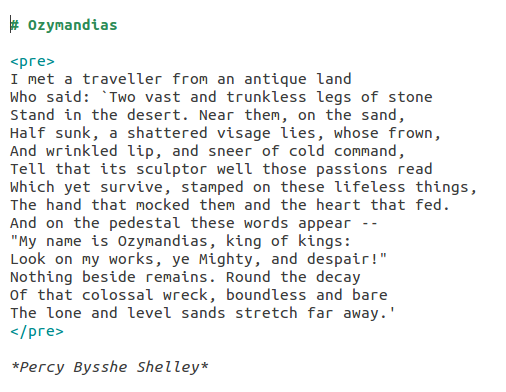 And here is what we want it to look like:

Markdown on the Web

We will create most of our markdown in Atom. You can optionally go to one of these sites and see if you can get started creating your own Markdown document on line:

Some of these sites show the HTML that can be derived from markdown. If you know anything at all about HTML, take a moment to study the HTML produced from your markdown.

You can view the rendered HTML for your document by entering Ctrl-Shift-M. You can use that shortcut as toggle to open and close the rendered view. Another way to get to this command would be to press Ctrl-Shift-P and type in markdown preview.

To save as HTML, right click on the rendered preview and choose Save as HTML. (This only works if you have Atom 1.9 or greater installed, but that should be the case in our classes.)

Render HTML, Save It, View Output on Google Sites

To convert markdown to HTML in Atom:

Place the both the markdown and HTML documents in a folder of your repository called MarkdownBasics.

This part of the assignment is now obsolete. Do not attempt it. We should be using AWS S3 instead.

Here, for instance, is an example of the kind of link I want to see on Google Sites: 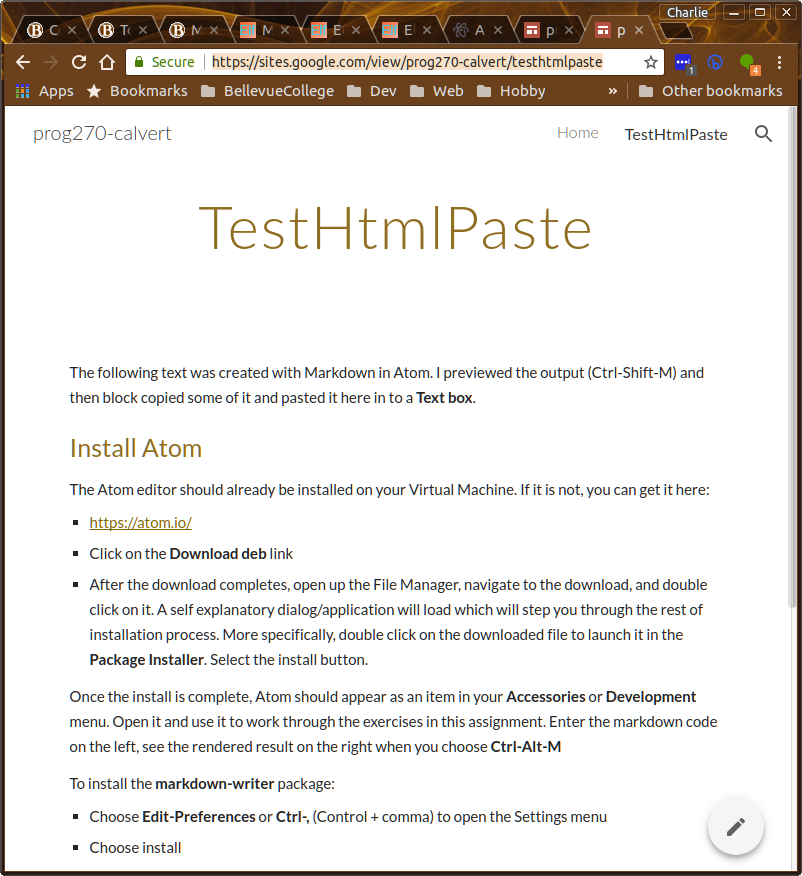 Once again, here are the steps to get rendered Markdown into your Google Sites. In Atom, preview your document. Select the text and copy with Ctrl-C. In Google Sites, insert a text box into a new page. Press Ctrl-V to paste it into the Text Box. Provide links to your pages when you turn in the assignment. Don't forget to save your raw markdown and HTML code in your repository.

Duplicate the "Longer Document" and the Ozymandias poem in two separate markdown files. Make sure that each file has the extension .md. For instance: my-file.md.

Place the markdown files you created in a folder of your repository called MarkdownBasics. Also put the HTML for these files in the same folder.

Provide links to the rendered HTML in your Google site.

Include at least one image on one of your pages.

There is more information about markdown on the web.

Of course you can find information on sites like Elvenware:

There are many tools available that can convert the Markdown shown into HTML. If you feed one of those tools the original markdown shown near the top of this document, then it can produce HTML that looks like this:

If you take the HTML shown above, and save it to a file called Markdown01.html, then open the file in a browser. When rendered in a browser, the file looks like the screenshot shown below: 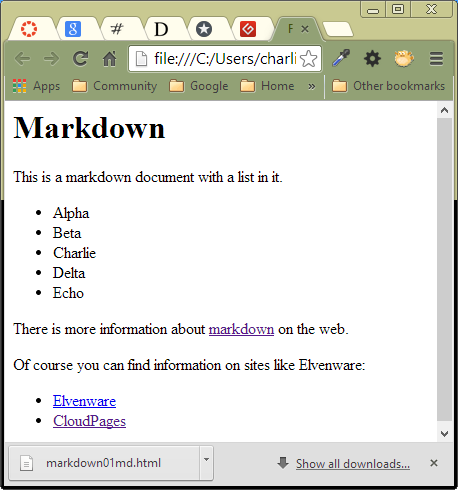 Take a moment to consider what we are doing. We are using an extremely simple form of markup to create nicely formatted HTML files that look reasonably attractive on the web. Markdown is flexible enough so that you can provide complex formatting for the HTML pages you render. For instance, much of Elvenware is now created with simple markdown files like the one shown above. Relatively complex tools, such as Stackoverflow, also use markdown as their primary means of formatting the text and code supplied by its users.

In this class we looking to find ways to create content of various kinds that can be shared between desktop machines, tablets, and phones. We are learning that we can create documents in Google Drive, in SkyDrive, on Google Sites, and on Evernote, and view them in all three places. We can also create markdown files and have them rendered in all three locations. In other words, this is another means of sharing information between multiple devices. As we will see, having information in simple text format like this provides special advantages that are hard to achieve with any of the other tools we have looked at so far.

NOTE: Remember, when you see a tilda, you can mentally substitute the path to your home folder for it. So on a system where you are logged in as bcuser, then following are two ways of saying the same thing: