This document is still being tweaked, but there is enough here to get you to a reasonably complete state.

Here are the steps to complete the midterm:

Polish the following programs, making sure they run smoothly, test cleanly, and are reasonably complete:

Extend at least one of these programs to support viewing images stored in the cloud. Delicious might be a good choice for this.

NOTE: I have pulled this section of the midterm as too ambitious: View a gallery of images created from Bitly or Delicious links and Twitter posts. We will do this before the quarter ends, but not yet.

Create a new project based on Week08-Single-Page-Express. Alternatively, copy your Bitly Refine or Twitter Refine application into a new folder labeled: Week08-Midterm. If you copied a project, make all the appropriate changes regarding the name of the application. When changing the title in /routes/index.js make sure to include your name. For instance: midterm-lastname.

Your modified app should have the following as shown in this video:

When the buttons are selected, search Bitly, Delicious or Twitter for your images. These means you need to create groups or hash tags in Bitly, Delicious and Twitter that will return the results you expect. For instance here is a possible twitter tag for my images: #calvert-images.

To make all this work, I created three three files and put them in public/javascripts/link:

The code for handling our various link options is in each of these files. The bitly cloud and bitly local requests are handled in bitly.js, the twitter requests in twitter.js, and the delicious requests in delicious.js. In general, the code from the:

I tweaked the code here and there, and wrapped stand alone functions in JavaScript literal objects, but otherwise the majority of the code ported over unchanged. In general, the code changes were focused on changes in naming conventions, not in a program logic.

For instance, consider this excerpt from the sole object found in delicious.js:

As you can see, this is similar to a method found in BootstrapDelicious. There was only one change:

Make some other minor changes to ensure that the unit tests pass. For instance: 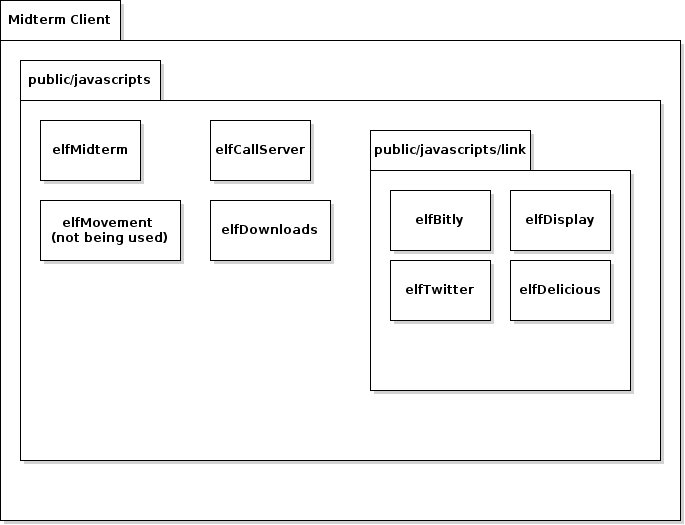 And the test runs should look a bit like this:

There is a folder called $ELF_TEMPLATES/UnitTest/Isit320Midterm2015 which currently contains at least numerous test suites. Use the new focused specs feature from Jasmine 2.1 to work with one suite at a time. To do this, change describe to fdescribe or it to fit. It you make a suite with fdescribe, then just that one suite will run and the others won't clutter your screen:

Don't forget to add this to karma.conf.js:

Don't forget that moving code in the link folder means you have to tweak the karma.conf.js files property:

NOTE: It is definitely worth the effort to learn at least a little about glob syntax such as \*/.js

Also make sure all the tests for BitlyRefine pass, as expained here. The tests for that program are maintained here:

These tests are similar to the midterm tests, but not identical.

Make sure the check-karma-grunt-config bash script passes. This file can be copied from JsObjects to your ~/bin directory:

Then copy the tests from the Templates/UnitTest/Isit320Midterm2015 directory to your spec folder and make sure they all pass. The goal here is to help you complete the midterm, but getting the tests to pass also effects your grade.

You can have tests of your own besides the ones that I create. It would be good to prefix your tests with your last name:

And so on. I'm not concerned about the name you give you the test files, only that I can easily tell your tests from my tests. Also, this will ensure that your custom tests are not lost when copy tests from JsObjects.

At some point in development, you want to take most of the jade from Week08-BitlyRefine and put it in views/bitly.jade. Don't link in layout.jade with an extend statement.

Then you want to run tests on the HTML generated by bitly.jade. To do this, you need to create the bitly.html that is loaded automatically by the tests I give you. Here is the command to create that HTML file:

Update your Bitly, Delicious and Twitter projects. Create and complete as best you can the midterm, placing it in the folder specified above.

Below are various hints, suggestions and details that will help you complete the midterm.

Make sure that you have code in routes/index.js for handling all three routes that load the HTML for our application. There needs to be one route for Bitly, one for Delicious, and one for Twitter:

The main class in control.js should now be called elfMidterm. The code for calling the server, creating the URL, and similar tasks should all be in the objects found in the public/javascripts/link folder.

Make sure the dashes work. I tried this on Bitly: elf-image. It did not work. But image did. I assume the trouble was the tag.

The query on bitly: 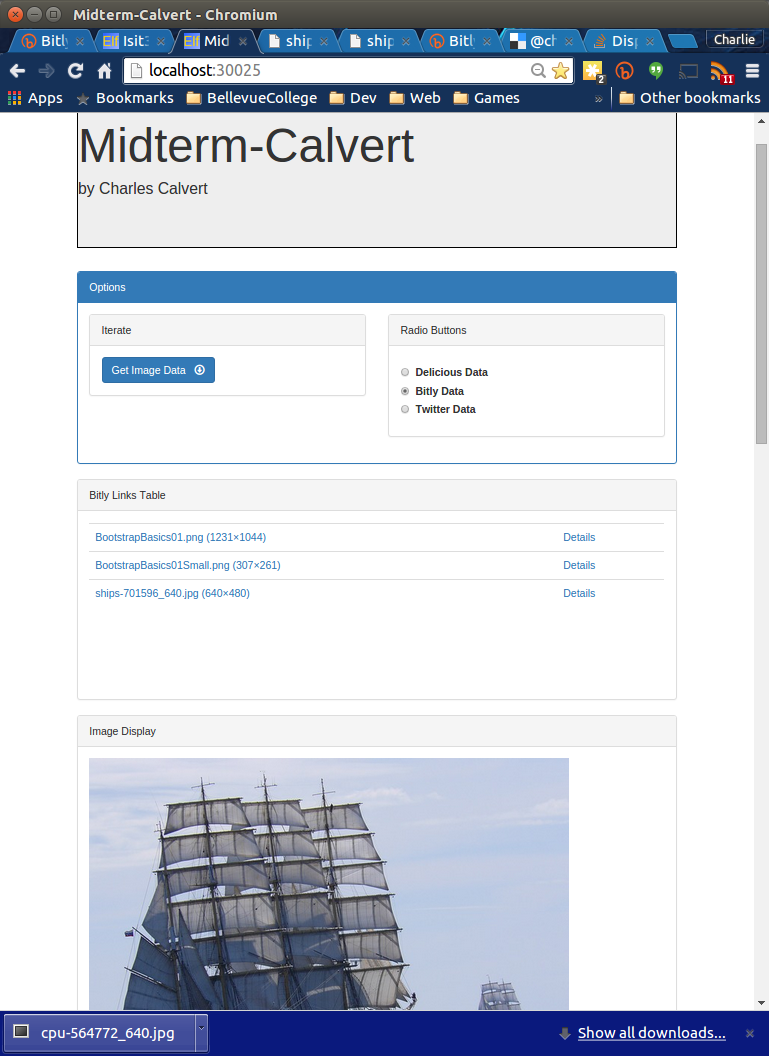 To show an image dynamically, you can start with an image tag in your HTML:

Then its nice to have a little code that will fill in the src field of the image tag when the user selects an image:

You have seen a variation of the first method before under the name appendUrl. It is used to wrap a bit of text in an anchor. This makes it clickable; it turns it into a hyperlink.

Here is what you img tag looks like before the displayImage method is called:

After the displayImage method is called, the HTML that you create looks like this:

The second line of code in the method sets the src attribute of the img element. This is all that needs to be done to load the image. If you are at all unclear on how the img tag and its src attribute work, please take a moment to do some research on the web. You have to understand those subjects to understand this code, or to continue doing any kind of serious work on the web.

NOTE: In my implementation, both the hyperlinkUrl method, which you have seen before, and the displayImage method, are part of the elfDisplay object.

I might well need more before I'm done, but I'm working hard to create small, easy to manage objects:

Of course, you will have to load this code in layout.jade as shown below.

Sometimes, on startup, you get an error about your favorite icon missing. I believe the CreateExpressProject script will put a 32 X 32 image file called called favicon.png in your public directory. To display the icon, you need to open app.js. Around line 17 you will find this code:

Uncomment the second line and change favicon.ico to favicon.png.

Now the error should go away. You can use any image editor you want to modify the favicon.png file. On Linux, the tool of choice is called gimp, but simpler tools will probably a do simple job like this just as well.

When we run our tests, control.js gets loaded. At the bottom (or top) of control.js is this code:

Notice in particular the call to getBitlyLinks. This call, or any similar call, will fail when we are running our tests. There are several solutions to this, but on simple solution is to move documennt ready into its own file, and then exclude that file from our tests. In particular, we can create a file called loader.js:

Then load the file in layout.jade

And exclude it form karma.conf.js:

When the user selects a radio button designating the service he wants to see, this method gets called:

If the user chooses either local or cloud bitly, then elfCallServer.loadBitly is called. If they choose delicious or twitter, then similar methods is elfCallServer are triggered.

The code in elfCallServer handles:

The one exceptoin is bitly which still just uses the downloads object to set up its display. This will need to be changed in a later version.

A discussion of how to find and store images will be on elvenware in cloud/FindImages page. For now, however, you can find it on ccalvert.net.

The version is not some important, just the inclusion of the twitter package in package.json. You will, of course, have to either: