The goal of this step is to be sure you have an elastic IP, and that it is attached to your instance.

When you are done, take a screen shot of your elastic IP page on AWS.

A single Elastic IP can be associated with only one instance at a time. When you switch from one instance to another, you might want to follow these steps.

It is possible to create an EC2 instance programmatically. This makes setting up your instances very simple and very fast.

First, install the AWS client. For this to work, you will need to have a tool called pip installed. Since Pristine Lubuntu does not come with pip, I include the instructions for installing it. It should not hurt to run the install command even if pip is already installed:

The following command might also work, but I recommend using pip as described above:

Once aws is installed, you can create an instance programmatically.

To create a tag for the instance you must take a second step. You can't create the tag name with run-instances. Instead, do it like this:

The --resources tag is the instance ID which you can easily find in the EC2 console.

Here is how to get the Public IP from the command line:

Step Two: SSH into your Instance

From the Linux command line, navigate to your .ssh directory:

Load your EC2 instance's private key, which probably has a name like Prog282-2014.pem, but which might have some other name:

Now SSH into your AWS instance:

Remember, there are two steps necessary to load a key into memory:

If you want to work in a browser, watch this video: 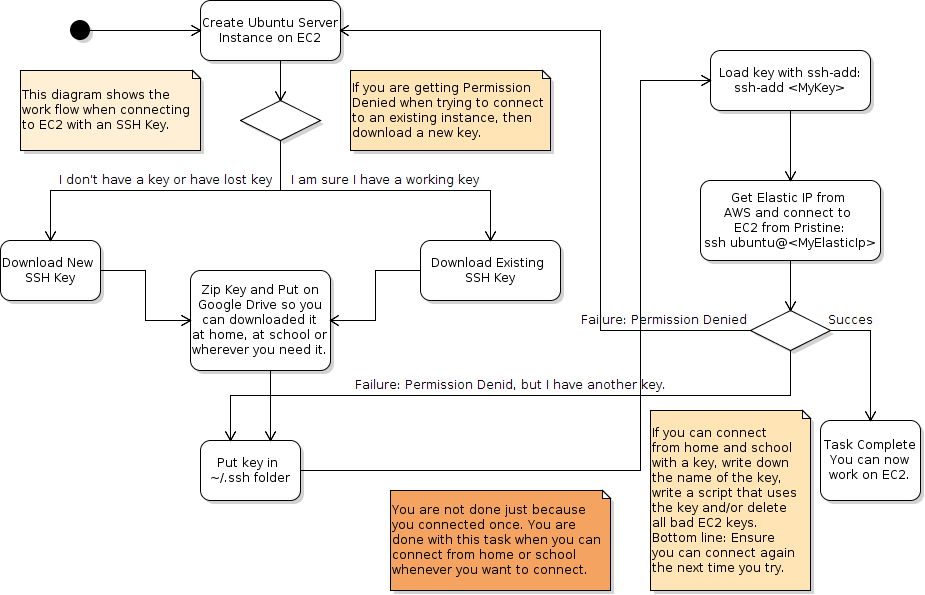 On AWS, create three Ubuntu 14.04 64 bit VMs. Use the same key pair and same security credentials for all three instances. You already know what to do, but you might want a reminder. This older video isn't exactly what you want, but it is close enough:

You can also look here:

Take a screen shot of the Volumes page and show the Created date. I want to see that all three images you created were made on May 29, 2014 or later. In the screen shot shown below you can see two images that I created and the dates when they were created. Note that neither was created on May 29, 2014, or later, so they are not new enough to meet the requirements for this assignment. Your screen shot must show the date created and as many other fields as you can manage to show. I've cut this image off, so that it was not too big to view on your browser. But the image you create need have no such limitation and it must show that your images were created after May 28, 2014. It should also show your attachment information. My attachment information inludes the instance id i-94bc2dc7. Make sure that ID is visible in your screen shot. 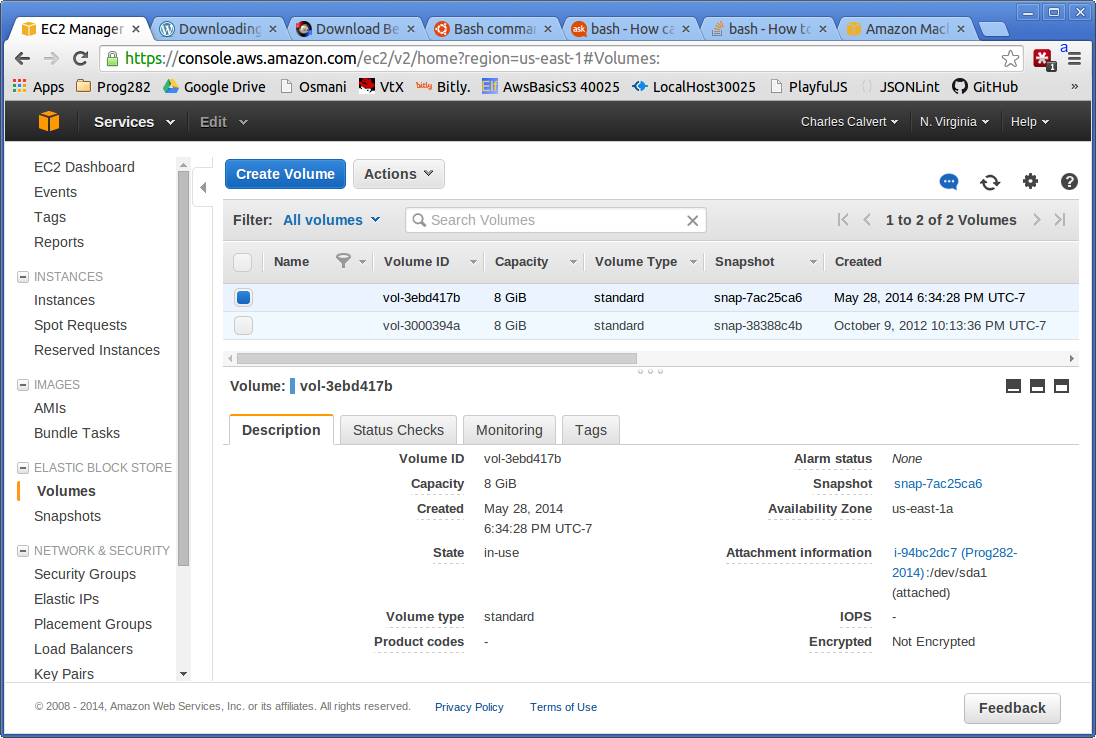 NOTE: You might get an error when you try to sign on to a new instance using the same elastic IP address you used for another virtual machine. The problem is this: in your ./ssh/known_hosts file an IP address is identified with a key that uniquely identifies a particular machine or VM. When you switch from one VM to another, but keep the same elastic IP, then you can get an ECDSA error about the key being changed. To fix it, remove the key from the ./ssh/known_hosts file. That is the file where the keys are kept. The error you got specifies the line number in the known_hosts file where the problem record is stored. This command will remove a particular line, in this case the 6th line, from known_hosts file:

After doing this, you should be able to ssh into your new VM:

Run these commands in each instance. First update the instance to the latest software:

Increasingly, I'm finding that taskself comes with Ubuntu distros, so you may be able to skip that step.

Right now you have to work with two SSH keys. The one from your Pristince Ubuntu instance, and the one on your AWS instance. There is no need for that. You can use the same key on both machines. This section describes how to do that.

When you started work on your Pristine Ubuntu instance early in the quarter, one of the first things you did was create an SSH key pair called, by default, id_rsa and id_rsa.pub. If you put your id_rsa.pub key in the ./ssh/authorized_keys file for your AWS instance, then you will be able to SSH into your AWS instance and access your BitBucket repository with the same key.

On your AWS instance, type this command to open your authorized_keys file in the nano editor that ships with Ubuntu:

This old screen shots shows something of what you might see when you open your authorized keys file in the nano editor:

Note that your authorized_keys file already contains the public key for the key pair your created when you created your AWS instance. You need to add the id_rsa.pub file from your pristine_ubuntu instance to this authorized_keys file. Open the ~/.ssh/id_rsa.pub file from pristine ubuntu in Geany. Select and copy the key. Now switch to your AWS instance and paste your key into Nano.

You know how to cut and paste. Just remember you have no mouse in Nano, and be careful not to damage your authorized_keys file. If you do, that will be the end of your instance. You will have to delete it and create a new one. You might, for instance, use the end key to navigate to the end of your existing key in your authorized_keys file. Press enter to create a new line. Now paste in your id_rsa.pub key. The result should look something like what you see below. Press Ctrl-O to save your work. Then press Ctrl-X to exit. 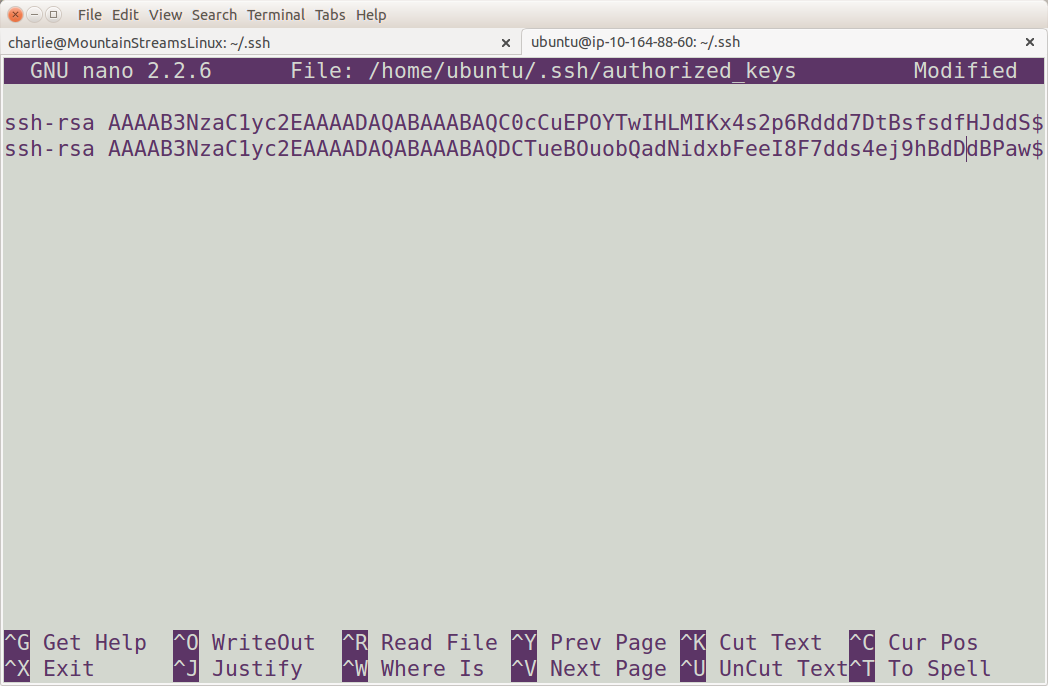 NOTE: It's easy to accidentally press Ctrl-Z and exit the nano editor without really closing it. If you are in the editor, and suddenly find yourself back at the command prompt without quite knowing how you got there, try typing jobs to see if you have any running jobs. If you do, type fg to return to the editor.

Okay. Once you have added your key to the authorized key file, type exit to close your AWS SSH shell and return to Pristine Ubuntu. From now on you should be able to access your AWS instance with just id_rsa private key loaded. You should also be able to copy your id_rsa_private key to your EC2 instance. From the pristine ubuntu .ssh directory type this command:

SSH back to your EC2 instance. Edit your ~/.bashrc file in nano and the following:

Be sure there is at least one blank line after the last command in the file. Now you should be able to push and pull from your repository without having worry about loading ssh-agent or your private key.

Create a Git folder in your home directory. Navigate into that folder and then clone your repository on each of your three new instances. On each instance, start one of your programs (npm start). Pick a program that talks back and forth between the server and the client. I'm looking for a program that calls into a route such as '/read' that you created on the server. Do something to make it talk back and forth some. Press Ctrl-C to close your node instance. Immediately run this command:

The result is somewhat messy, but it is informative. Create a screen shot that might look something like this: 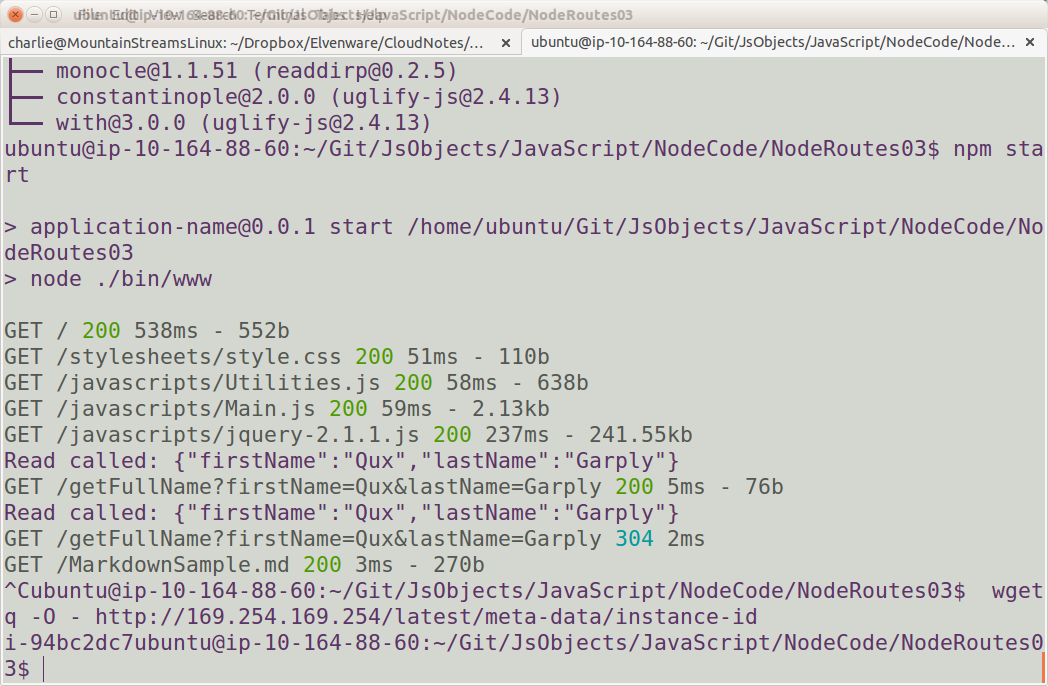 Note the GET lines with the green 200 in them. Those show that your client is talking to your server. I'm looking for that kind of thing. I'm particularly interested in requests like the one for /getFullName. That shows you are requesting more than just HTML, CSS and JS files. In other words, requests for style.css, or Utilities.js are nice, but they just prove that your app is loading, They don't show that you are calling specific routes.

If you don't see GET statements like those shown here, check how you are starting your app. My package.json started the app like this:

Now let's talk about the output you get from the call to wget. See right at the bottom on the left where it says i-94bc2dc7? That is the Volume ID for my EC2 virtual hard drive. The ID was retrieved by using wget to pull down the results from accessing the specific URL shown above. Your results will be different than mine. I'm looking for your instance ID and matching it to the ID's in your second screen shot, the one that showed your three volumes. In total, your screen shots should show three ids, one in each screen shot. Each screen shot contains one instance id, and each one is different. That's three IDs, one for each instance. For instance, the sample screen shot I show here represents one screen shot and one instance id.

In total, you will need to create three of these screen shots, one for each of your instances. I'm matching the ID returned by the call to wget to the id from the list of volumes in your previous screen shot.

NOTE: You don't have to all three new instances running at once. You can:

TIP: You may find it useful to create scripts that perform certain tasks. You might also want to secure copy (scp) your scripts back and forth between pristine ubuntu and your AWS instances. For instance put the lines that install node into a script called installNode.sh

Create a folder in your repo called Week08Ec2Instances. Place your five (or more) screen shots in your folder. Push.