Installing Python is usually a very simple procedure. There are two ways to think about this problem:

There are two common versions of Python: Python 2.7 and Python 3.2. I still find myself using Python 2.7 most frequently, since many older libraries work with it. However, 3.2 is apparently the future of the language.

Make Sure Python is on Your Path

Life is much easier for you if Python is on your path. You can set you path with Windows tool accessed from the Control panel: 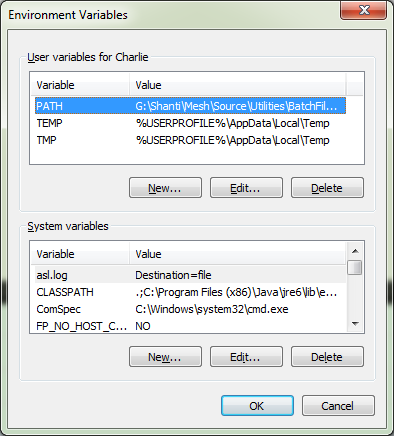 Figure 00: Look in the User Variables for Charlie and Edit the PATH.

In most cases, you simply prepend or append the value C:\Python27 and C:\Python27\Scripts to your PATH. Of course, if you installed Python in a different folder, then you need to enter a different value.

Figure 01: Here I am in the process of appending the string J:\Python27 to my path, since that is where I have installed Python on my system.

When you are done, click OK. Now open a Command window. You should now be able to invoke Python from any folder on your system by simply typing the word python:

You rarely need to do anything to install Python on Linux. It comes with the system. If by some off chance you don't have Python installed, try:

If you want the latest Python, you can issue the following command:

After the install, you should put your scripts in this folder:

The folder will be created for you automatically but you need to make the scripts you create executable:

After doing this, you can run the file by browsing to a URL such as this one:

Configuration of cgi-bin on Linux with Apache

As mentioned previous, Python and Linux are set up automatically for you by apt-get. Nevertheless, it can help to understand how the process works. The file responsible for configuring Apache to run Python scripts is located here:

The important sections of that file look like this:

What the code shown above tells us, is that there is a cgi-bin directory created for us, that it is designed for scripts such as those used in Python web applications, and that it is located here:

After the ScriptAlias directive there is code to configure how Apache handles files found in the /usr/libe/cgi-bin directory. The most important part is the Options directive:

This options directive tells Apache that CGI execution is permitted in the /usr/lib/cgi-bin folder. Executing code is a powerful privilege, so we want to be sure that it can be accomplished within a clearly defined context.

Don't forget that you need to put your Python scripts in the cgi-bin directory, and you need to make sure they are executable:

Set up HTML files in Your Home Folder

Here is a link that can help you get started:

Though it can be a security issue, it is sometimes useful to place HTML files in your home folder. You will need to have the right permissions on the folder. Here is a script called publicHtml.sh that will be helpful. It first sets owner of the folder, and then its permissions:

You should make the script executable:

Before buying a book on Python, spend time searching the web to find the many great resources available for free. For instance:

As you start working with Python, it won't be long before you start hearing about easyinstall. You can use this tool to automatically install and configure many of the powerful add-on modules that help to make Python so useful. In general, you just type easyinstall SomeModule in order to install a tool that you want to use. It is, in effect, a bit like apt-get and similar tools that you might know from Linux. The problem with easy_install is that it does not come built-in to many Python distributions. The solution, fortunately, is quite simple.

To install easyinstall, just download ez_setup.py. By download, I mean copy the text for the file into a python script called ez_setup.py. Once you have the script on your disk, then type python ez_setup.py, where python is the path your python executable. On Windows, your version of Python might be in c:\python27, so you would type the following:

After the script runs, easyinstall will be automatically installed into the c:\python27\scripts directory, or to whatever folder you Python install occupies.

Pip is similar to easy install. You should have both tools on your system. Assuming your Python\Scripts directory is on your path, to install Pip, you can write:

Now you can easily install other modules:

For Windows, go here to get the forehead install:

If that doesn't work out for some reason, the actual project is here:

On Linux, do this:

Another approach is to make sure that all of Lamp is installed on Linux:

That should get you all you need. if necessary, try installing python-mysqldb as above. To check if it is working, start python and type import MySQLdb. If you can press enter and not get an error, then you should be up and running: