In this chapter you will learn to use Git from the command line.

There are many GUI interfaces to Git. Why not use one of them? There are several reasons:

Working with Files in a Repository

Now you have everything checked into your local copy of the Git repository. To push these changes to your GitHub, Bitbucket or other remote copy of the repository, issue this command:

Now, lets add a folder named temp and a file named foo.txt to the repository:

The above commands create a new folder called temp. The second line shows how to navigate into the folder. The third line creates a new file called foo.txt with the contents being the single world foo. Finally we navigate back to the original directory where we were before we created the temp directory.

Now add the changes and commit the work to the repository:

After issuing the last command, you will see several lines of feedback from Git. Now it is time to push your changes up to GitHub (or to wherever your repository is stored).

If you do not have an SSH key and repository set up, you will now be asked for your username and password.

Sometimes you will have conflicts between what is on the server and what you have on your machine. In that case, do a merge. This will create a local copy of your files with both sets of text in it. Open your file in a text editor, find the places where the conflicts exist, fix them manually, and then go through another add/commit/push cycle.

Suppose you run git status and get this result:

Here you can see that one file, index.html, has been modified. Another file, called foobar.txt, has been created. To commit them both, do this:

That's git add followed by a period. The period is a wild card saying: "Add everything that has been changed." Now check your status:

As you can see, there are now two files waiting to be committed. You can commit them like this:

Now push them to the repository:

Next, make sure you have an SSH private key and public key pair on your client machine, and store the public key portion in Bitbucket or GitHub, depending on the service you are using. To do this, first open the public key (id_rsa.pub) in an editor such as geany, nano or notepad++. Block copy it, then paste it into the appropriate field on the GitHub or Bitbucket web site. In particular, on Bitbucket, choose Bitbucket settings from the icon in the upper right portion of the Bitbucket site, and then select SSH keys from the menu on the left. On GitHub, choose the Profile picture icon at the top right of the site, and then select Settings and then SSH and GPG keys from the menu on the left.

Don't forget to call ssh-add on your private (id_rsa) key, as described at the link shown above. Typing ssh-add at your command line will prepare your client machine to connect to GitHub or Bitbucket and will take care of authentication for you.

Now that you have SSH set up, go to the directory you want to use as the basis for your repository. If you don't have such a repository, then start from scratch:

Now initialize Git by typing typing git init. This converts an ordinary directory into a Git repository. In particular, it creates a hidden directory called .git. That directory stores all the files necessary to configure and maintain your repository.

Then get the command from Bitbucket or GitHub that is used to designate where your remote repository resides. The command might look like this, though the exact url at the end will likely differ in your case:

If you have multiple changes that you want to add and commit at one time, then use a period in your call to git add:

Finally, add the following command to push your repo to Bitbucket:

After this first time, you will be able to push like this:

It's only the first time you need to add -u origin --all.

To sum up, if you have an existing repository, and you want to push it from the shell do something like this, where the exact URL for your repository will of course be different from the one shown here:

Sometimes you will have a session that looks like this:

If you get an error like that, it means you forgot to run git add and git commit.

Here is a summary of the steps:

Here are the instructions from GitHub, which are just a variation on what I write above:

Here are the instructions from Bitbucket, which are also just another variation on what I say above:

If you use PuTTY, it will probably be simplest for you if you use Git with Plink, which is part of PuTTY. During the Git SCM install, you have the chance to set this up, as shown in the screenshot below: 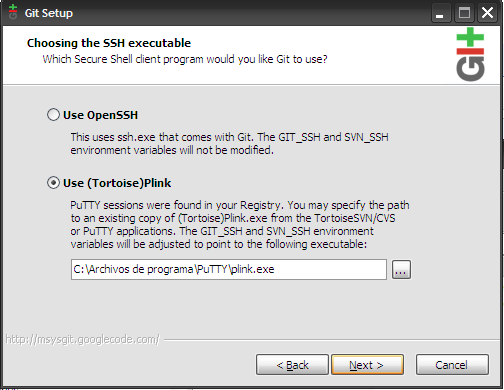 If you have already installed Git, don't despair! All the option above does is set an environment variable named GIT_SSH. If you chose the option shown in the screenshot, then when you type SET at the command line, you should find something like the following value for GIT_SSH:

Since you have a deep knowledge of environment variables, you know how to modify this variable using the Environment Variables dialog. 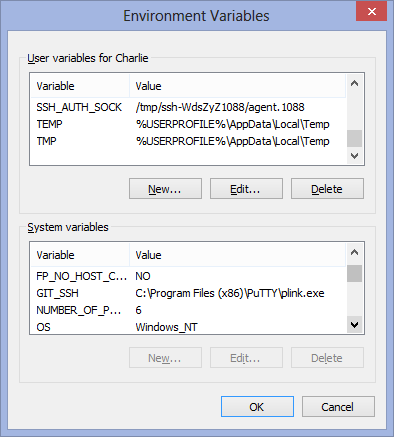 Here is an example of how to configure the variable:

If you have been living a sheltered life, you can learn about about environment variables here:

A related issue is the "Host Key is not Cached" error, which is discussed elsewhere in this document.

You should always have a mental image of the directory tree in which you do your work. This can be important when you are creating a new repository. One mistake that newcomers often make is to nest one Git repository inside another. For instance, suppose you have a repository here:

In most cases, you don't want to add another repository inside this existing repository:

It is not illegal to do this, but it is not likely that you did it on purpose, and once you have made the mistake it is hard to undo.

You can fix this error, but you don't want to face this problem. Either keep a clear mental image of your file directory structure, or use the Windows Explorer to review your file structure before you create a new repository. In general, a good plan is to create a folder called Git or GitHub, and then create all your repositories as children of this folder:

It is, of course, okay to use complex directory structures inside any one repository. The mistake is not nesting directories, but nesting repositories. For instance, the following is fine:

Terminal is Not Fully Functional

You can get rid of this warning by defining an environment variable called TERM and setting it to msys.

On Windows, you can type:

Or edit the Environment Variables for your Account and create a new variable called TERM set to the msys.

On Linux, you export TERM = msys

With Bitbucket and GitHub so readily available, one might suppose that the origin for our repository should always be in the cloud. This need not necessarily be the case. Instead, we can have a local repository that is shared between multiple users on a single machine, or between users on a local area network. Here are some examples of how to clone a local repository: